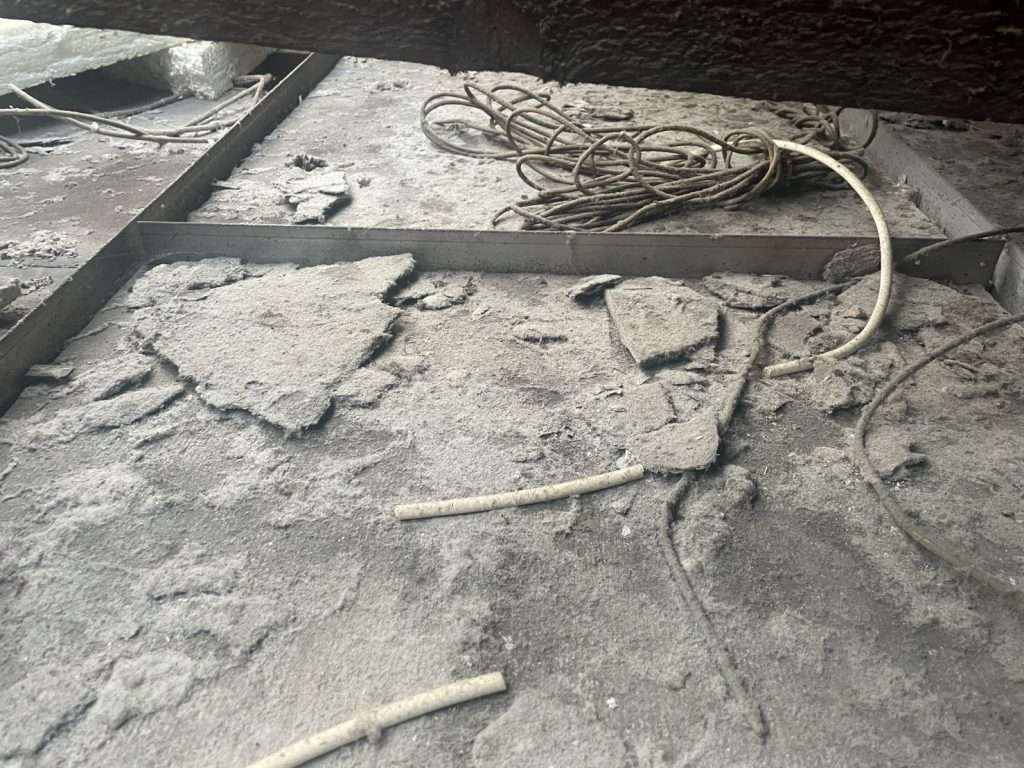 How often do you wonder if you’re at risk from asbestos at home?

It’s probably not something that many people think about in their daily lives but frighteningly homes up and down the UK are riddled with asbestos.

Asbestos can be found in a surprisingly high number of places throughout our homes, including in ceilings, roofs, roof cavities, within walls, in ceiling tiles and floor tiles, pipe insulation, boilers, sprayed coatings, garage roof tiles and corrugated cement sheets.

The dangerous material was used heavily by our construction trade throughout the 20th century until its use was banned in 1999. As a result, any home built – or extended – before 2000 may contain asbestos and some experts estimate the hidden killer can still be found in around half of UK homes.

Do I need to demolish my home if it contains asbestos?

Only recently a heart-breaking story came out of Australia about a couple who were forced to demolish their $1.8million dream home after they discovered it contained asbestos.

According to reports in the Mail Online, Dean Papas and his pregnant wife bought what they thought would be their ‘forever home’ in Canberra at an auction last May.

About 30 workers were sent to fully renovate the property and just weeks later the couple moved in with their two-year-old son before they discovered it contained asbestos.

They first became aware of the problem when an electrician was installing a bathroom fan for them and found suspicious-looking fibres lying underneath insulation in the ceiling cavity.

The loose-fill material was identified as asbestos which can cause a number of potentially fatal illnesses, including mesothelioma, if its fibres are inhaled.

Thousands of homes across Canberra were insulated with asbestos during 1960s and 1970s. When the dangers surrounding asbestos later came to light a $100million clean-up programme was launched in the 1980s to identify affected homes in the area and strip them of asbestos – but some were missed.

In 2014, the Australian Capital Territory (ACT) Government rolled out a $1billion scheme to buy back and demolish homes containing asbestos. The ACT Government has now bought the Papas’ property so it can be demolished.

In the Mail Online’s report, Dean Papas said losing his home was awful but the hardest part was knowing his tradesmen, his family and himself had been exposed to the toxic material.

UK governments have not taken the same stance as the ACT Government about removing asbestos from homes.

Current government advice here is that homeowners should consult their local council for information about asbestos at home.

Homes do not need to be demolished if they contain asbestos. However, it is essential that you are aware if you do have asbestos at home, that you know where it is and that it is properly managed to ensure it is kept in good condition.

Asbestos begins to release its deadly fibres when it is damaged, disturbed or left unchecked to deteriorate and this is when it becomes a serious problem.

How should I manage asbestos at home?

The only way to safely manage asbestos at home is to call in trained asbestos professionals.

As we’ve already mentioned inhaling asbestos fibres can lead to a number of serious and even fatal diseases and if it’s disturbed in your home in the short-term, at least, you will be looking for somewhere else to live.

During a court case last year it emerged that one homeowner was forced to live in a hotel for almost a year after holes were drilled into asbestos insulating board (AIB) in his garage ceiling and the resulting dust spread through his home via its central heating system.

The homeowner was unable to return home for 11 months whilst his home was deep cleaned to ensure all traces of the dangerous asbestos fibres were removed.

Highly qualified asbestos experts – like our own team at Acorn Analytical Services – know what to look out for and know how to manage asbestos safely and professionally.

Our advice to anyone whose home was built before 2000 would be to get an asbestos management survey so you can find out if you have asbestos at home and what you may need to do about it.

Before you take on a refurbishment project you should ensure that you or your contractor arranges for a team of asbestos professionals to carry out an asbestos refurbishment survey.

The findings of the asbestos refurbishment survey should be shared with workers involved in your refurbishment project to ensure that they do not accidentally damage or disturb asbestos and put themselves and others at risk as well as your home.

Where can I go for help to deal with asbestos at home?

We know that lots of people find the thought of dealing with asbestos terrifying. Fortunately, our team have decades of experience of dealing with the deadly substance to ensure it doesn’t put people’s lives at risk.

We really care about what we do so we make sure our team are up-to-date with all the latest training and developments in the asbestos industry.

This also means we go above and beyond the duties you might expect an asbestos consultancy to fulfil.

In addition to our day-to-day work with businesses, public bodies and individuals we also give up our time to raise money for charities supporting asbestos victims and to raise awareness about asbestos in the wider community.

We run regular educational podcasts, publish informative articles and have released a book filled with useful advice and tips called Asbestos The Dark Arts which you can download for free from our website.

As one of the UK’s last wholly independent asbestos consultancies we can also promise you that the advice we give you will always be in your best interests so if you need help or advice contact us today.