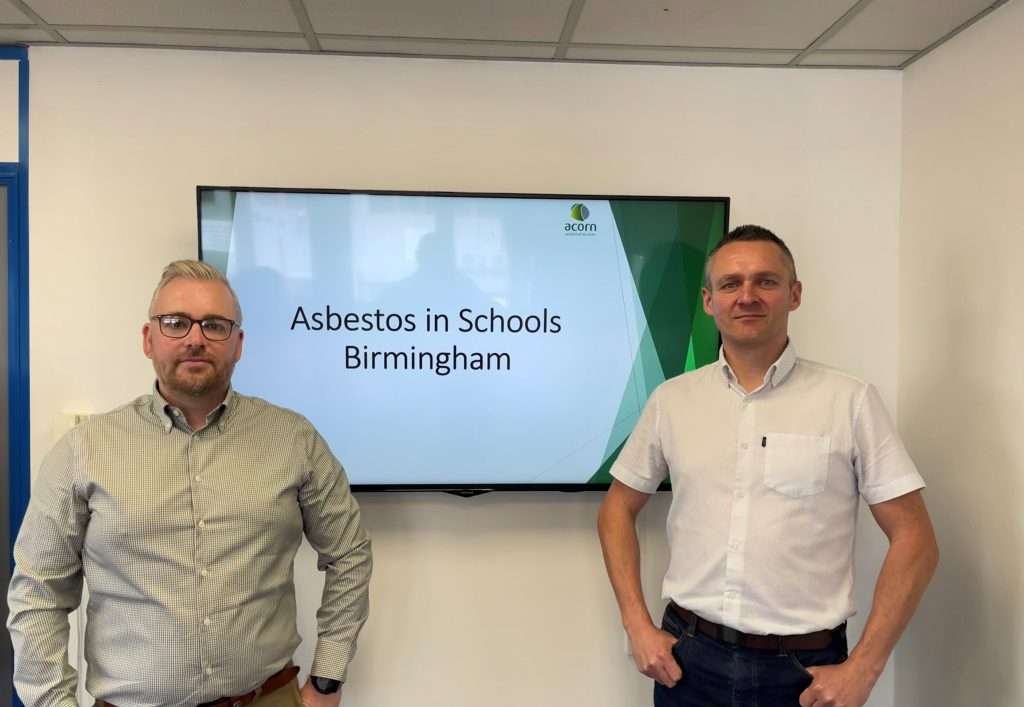 This week we were proud to launch a hard-hitting campaign targeting the issue of asbestos in schools.

If you read our blog last week you will know that more than 20 years after the UK banned the use of asbestos here, it’s estimated that a high percentage of our schools still contain the deadly substance.

Shockingly, on average between 200 and 300 people die each year in the UK because they were exposed to asbestos in schools as children. The UK also has the world’s highest death rates for teachers dying from mesothelioma – a cancer which is caused by exposure to asbestos in 90 per cent of cases.

For years we’ve worked hard to educate the construction industry and the wider public about the dangers of asbestos.

Acorn representatives have also been involved in high level talks with fellow campaigners and politicians and have called for action to be taken to address the awful legacy of asbestos in schools.

We have met with families who have lost loved ones because they were exposed to asbestos in schools and have seen firsthand the heartbreak those families go through every day.

What are we doing about asbestos in schools?

This week  – to mark World Teachers’ Day – Acorn launched a campaign to protect teachers and children from asbestos in schools.

To begin with, the campaign will focus on the city of Birmingham where we have one of our bases and where several of our employees live and work. We are starting our campaign in Birmingham because over the past few years, the city has hit the headlines numerous times because of asbestos in schools.

A couple of years ago it emerged that more than 80 per cent of council-run schools in Birmingham could contain asbestos. The news was widely carried by the likes of the BBC and the Birmingham Mail and at the time council chiefs were quick to stress that any building constructed before 2000 has the potential to contain asbestos and it is safe if it is not disturbed or damaged.

We wouldn’t dispute this. The problem is that in a school there is a far greater chance of asbestos being disturbed or damaged. As we mentioned in our blog last week, one of the reasons why people in schools are more vulnerable to asbestos if it is present is because children are playful, boisterous and often move in groups. It’s therefore not uncommon for school buildings to be damaged and this can lead to harmful asbestos fibres being released into the air.

There are also many places in schools where teachers and children can regularly come into contact with asbestos. For example, did you know that many of the noticeboards in schools built before 2000 contain asbestos? Every time a teacher – or a pupil – puts up a new piece of work or takes down an old one they could be exposing themselves to asbestos. Sadly, we know of teachers who have died young from mesothelioma simply because they pinned work to noticeboards.

We are not trying to frighten anyone by sharing these statistics or by sharing our experiences but we are committed to doing everything we can to highlight the issue of asbestos in schools because it needs to be tackled. Let’s make this clear – no one should be contracting serious illnesses or dying because they have been exposed to asbestos. This situation is entirely preventable, and we owe it to our teachers and our children to make sure they are protected from the danger posed by asbestos.

How will our campaign about asbestos in schools work?

As we said earlier, the campaign has been launched in Birmingham this week. We’re pleased to say it has attracted lots of attention from the media, including local broadcasters and it has already begun featuring on prominent news websites including the likes of UK News Group and Business In The News and has been shared widely by the Greater Birmingham Chambers of Commerce.

We have also reached out to Birmingham’s MPs to see if can find ways to work together to lobby for change at a government level and, as the campaign progresses further, we will be inviting other interested parties, lobby groups and charities to add their voices of support to the campaign.

Initially, our focus will be on Birmingham but as an independent asbestos consultancy offering a comprehensive suite of asbestos consultancy services from asbestos air testing and asbestos surveys to removal management, and UKATA accredited training across the UK it is our intention to roll out this campaign nationwide.

What is the first step to tackling asbestos in schools?

Many headteachers and governing bodies are not aware if their school contains asbestos. It is imperative that all headteachers – or indeed anyone who is responsible for managing a public or commercial building – know where asbestos is in their buildings and what state it is in. If you don’t know where your asbestos is and you don’t know what state it is in you are not going to be able to manage it properly. As a result, you could end up putting people’s lives at risk and you could be prosecuted for failing to comply with the law.

How can you help with our campaign to tackle asbestos in schools?

At Acorn, we are serious about tackling the problem of asbestos in schools. We are offering free asbestos audits to headteachers in Birmingham because we want to help them take the first steps towards getting on top of the problem.

We are committed to working with local politicians, campaign groups, charities and other interested groups to raise awareness of the issue within schools themselves but we also want to see action taken at a government level to address the issue of asbestos in schools once and for all.

Other countries around the world have made concerted efforts to tackle the problem of asbestos in schools. Here it is something that has been talked about for years, but progress is far slower than we would like. Things have got to change. Our teachers, headteachers and school staff deserve better. Our children deserve better.

If you work at a school that was built before 2000, ask your headteacher if they know whether the building contains asbestos. If they don’t know, let them know we can help them.

If you have a child or a grandchild at a school that was built before 2000, find out if the school knows whether it contains asbestos. If they don’t know, let them know we can help them.

If you know there is asbestos at a school you are connected with and the management team are unsure about how to manage it, tell them about us. Let them know we can help them.

If you feel you can help us with our campaign to tackle the problem of asbestos in schools email us today on birmingham@acornasbestos.co.uk