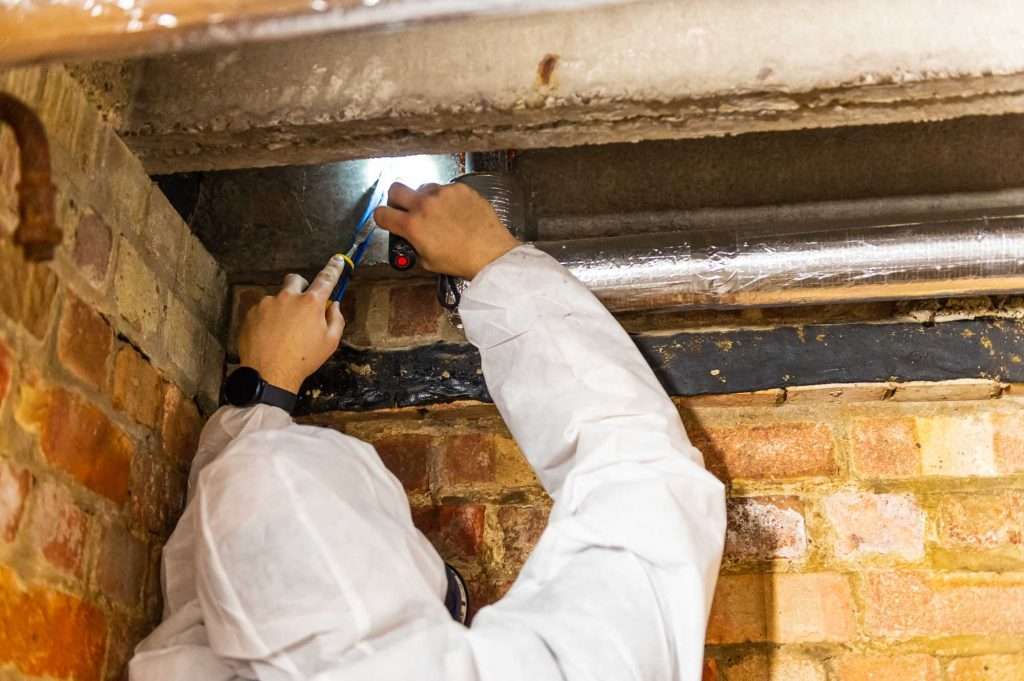 When people think about asbestos, they often associate it with larger buildings such as warehouses, schools, hospitals and factories. Often, people do not think about asbestos when it comes to homes, but asbestos was heavily used in parts of the domestic market and used on large scales within local authority homes.

In this blog, we will take you on a virtual tour of a typical three-bedroom ex-local authority property we recently worked on to help you learn what to look for.

This should be particularly useful if you are a homeowner looking to refurbish your property or an investor who wants to do up properties.

In this example, the hallway was quite small and had doors leading off to the living room, kitchen/diner, cupboards and toilet.

On the ceiling there was a stipple effect decorative coating – in the asbestos industry, we refer to this as textured coating. It has got asbestos in it and the content is generally around the 2-5%. If you are looking at ceilings in properties, always look for textured or decorative coatings as they could contain asbestos.

The doors leading to the other rooms had infill panels which were above the door but below the ceiling. In this particular property they were a mixture – there was cork covering one of the doors and the one leading into the kitchen/diner had an asbestos insulating board. The removal of an asbestos insulating board must be done by a licensed asbestos contractor because it has a higher asbestos content and therefore poses a higher risk. You need to be aware of this as it will generate an additional cost.

In the hallway, there were two cupboards. The gas meter cupboard had plastered walls and a textured coating to the ceiling. On the floor there were purple floor tiles made from a firm plastic type of material. These floor tiles have got quite a high asbestos content when it comes to flooring. They usually have around 20-25% asbestos content and, in this case, they were glued to the floor with an asbestos glue. This is a nuisance as it is hard to get up. To remove the material, you need a grinder to grind the surface.

The gas meter had pipes running off it and at the top, just where the valve is, there was an asbestos gasket, so the actual gasket holding the flange on the gas meter had asbestos content as well.

The second cupboard in the hallway was an old heater cupboard. These types of properties have old air heating systems which basically consists of a boiler that generates warm air which is channelled through the house through metal vents. On the back of the cupboard door was an asbestos insulating panel which would have been installed to give the door some fire protection.

The warm air heater had been removed from the cupboard, however, on one wall there was an asbestos insulating board panel which probably would have covered the wall where the heater rested against it.

This was a large room and the construction here was mostly similar to the rest of the property, however the ceiling had a new plaster finish effect. We had had an asbestos survey done and we knew above this finish was the asbestos coating that we had already found in the hallway. If I was doing works in here, such as electrical cabling or pipe works, I would have to take that into consideration.

There was a modern, non-asbestos floor covering, however we knew there were asbestos tiles beneath this which ran into the kitchen area. Some of the floor tiles had been removed and you could see the remnants of the black glue.

From experience, we would expect the wall cavity to be lined with asbestos, either in cement or insulating board.

Above the kitchen door, there was a header panel, which we knew contained asbestos.

In the kitchen area there was a new section of plaster board. To the untrained eye you would think there was no asbestos here because it was just plaster board ceiling, however it had only been three quarters boarded. The ceiling had a stippled circular pattern. It looked different to the stippled ceilng in the hallway but this one also contained asbestos. Remember, it doesn’t matter about the finish or the coating itself – what we are concerned with is what is within the product.

Finally, in the kitchen, there was a stainless steel sink. Underneath, it were two pads – one under the drainer and one under the sink itself. The pads were black and probably about 4-5 sq inches. They provide sound proofing so when you drop something into the sink it doesn’t make a clattering noise. Over time, when hot water gets poured into the sink, the pads generally deteriorate and start to fall apart and land in items within the cupboard. This is another area where there are asbestos containing materials.

The living room had an asbestos textured coating, stipple effect ceiling. There was also a warm air heater with a vent lined with asbestos insulating board. Beneath the carpet were asbestos floor tiles.

The landing had asbestos textured coating and this was also present in the bedrooms and bathroom.

Inside the landing cupboards was asbestos textured coating too. The doors which led into the bedrooms and bathroom also had asbestos insulating boards and panels.

One of the landing cupboard doors had a vent for the warm air heating system and to the floor was a warm air vent which was surrounded by an asbestos insulating panel. At the back of the cupboard, protruding from the ceiling, was an asbestos down pipe.

The master bedroom had a plaster ceiling but we sampled it and it had remnants of the former asbestos texture coating.

There was a bin cupboard which had asbestos lining running across the ceiling. The canopy outside was painted, the inside wasn’t. Sometimes these cupboards have asbestos insulated boards. Low down, on the course of brickwork, there was an asbestos dampproof course which was sticking out by about 1cm.

At the rear of the property, there were asbestos soffit boards which ran underneath asbestos cement guttering.

Hopefully, this tour will have given you a better understanding of the types of asbestos materials you can find in a domestic property, especially in an ex-local authority property.

We’re a professional asbestos consultancy helping businesses deal with asbestos compliance using asbestos surveys, asbestos testing, and asbestos removal management. Please call one of the team, or use the online form to obtain your free quotation. If you would like further information or advice on asbestos and asbestos training, contact the team on 0844 818 0895 or email info@acorn-as.com.