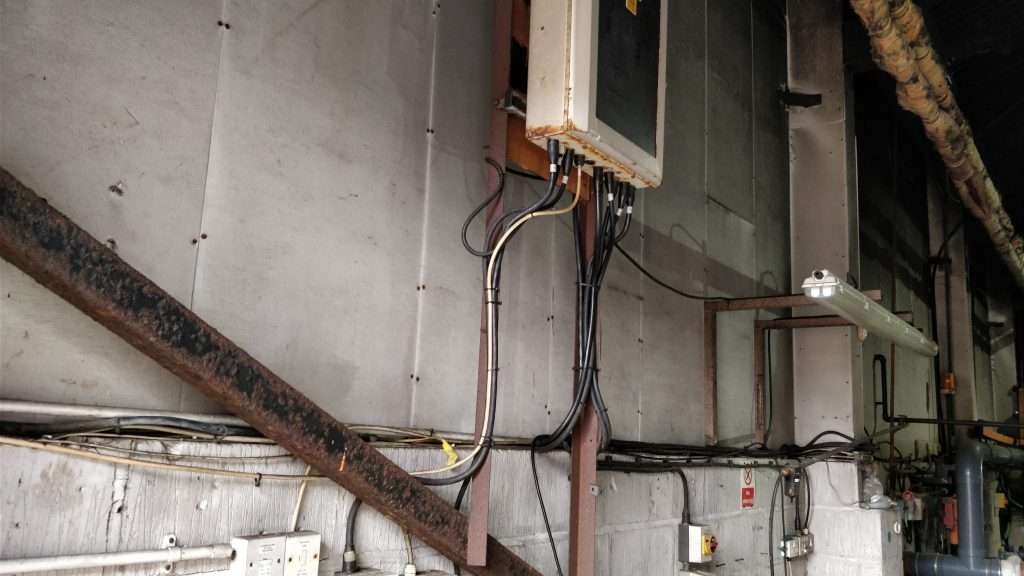 Asbestos insulating boards are boards that have a high asbestos content usually containing Amosite (Brown) and can also contain Chrysotile (White) asbestos. When you look at an unpainted board you can see the asbestos fibres. The boards can be easily damaged and can easily release asbestos fibres.

They tend to be off white or grey in colour, depending on how much asbestos they contain. Older board can contain Crocidolite (Blue) asbestos which can easily been seen in unsealed boards.

Where were asbestos insulating boards used?

The boards were used all over because they were so versatile. It is amazing how much they were used and the locations they were used in. Sometimes there is no obvious reason as to why the material is present which is a problem in itself for asbestos surveyors.

It was used as a liner, panelling, fire breaks, glass buildings, packaging, flooring, windows. Due to its versatile use it was used for anything and everywhere. Most commonly, the boards were used in ceiling tiles and this is a big area of concern in this country.

As it was often employed as a fire protector it was extensively used in buildings such as schools, hospitals, factories, warehouses, offices and even houses.

In houses, it was predominantly used around boilers, heating systems and electrics – anywhere which could be a fire risk. Warm air units would be lined and all the vents and ducts would be lined with asbestos insulation boards. The warm air blowing through the ducting is blowing across the asbestos which has its own problems.

How were asbestos insulating boards installed?

It was installed along the same lines as timber is installed – screwed, nailed, glued and even laid in grids. Generally speaking, carpenters would tend to be the ones to saw them, fix them and install them.

How do we remove asbestos insulating boards?

Generally, this work needs to be carried out by a licensed asbestos contractor, under fully controlled conditions and the local enforcing authority will need to be notified. An asbestos enclosure is constructed and the removal takes place in a negative pressure environment. It is vital that the correct decontamination procedures are used and that all asbestos removal contractors wear appropriate person protective equipment (PPE) and respiratory protective equipment (RPE).

The process varies depending on the application, how it was used and how was it fixed.  Like all asbestos, you need to supress the material. Handheld sprayers are used to make sure it is damp to reduce the release of any fibres. If you have a ceiling that has been screwed and painted over the contractor will need to use magnets to locate the screw heads and then remove the screws whilst shallow vacuuming.

Once the board have been removed, the area is fully decontaminated and air tests are carried out to ensure the area is free of contamination. Asbestos insulating board waste is then transported to an authorised asbestos waste centre.

On occasions, you can remove a whole loose board without disturbing it and that may be considered non-licensed work but generally this work would be enclosed works and a removal licence is required.

What issues do you face when you remove asbestos insulating boards?

You need to consider how it was installed in the first place. If it was drilled in situ, dust and debris may have formed and gone into wall voids and ceiling voids. You also have to consider how the material may have been treated over the years when other work has gone on. We have seen electricians hammer through the board and then dust and debris is left sitting on the surface below.

When tiles are removed from a painted asbestos insulating board, the paint sticks to the grid the tiles were on. Left behind will be residue stuck from the tile onto the grid. You may be able to remove the tile whole but if it breaks off, you end up with insulating board stuck on that paint.

Occasionally, people will want to keep their old tracking for their new tiles to go in, but sometimes demolition is needed and the tracking will get broken. Tracking might need to be removed to get to asbestos otherwise the area is not going to be left in a safe state.

With asbestos removal, sometimes there are surprises. When you are taking down ceilings, you can’t 100% know what’s above the ceiling until you start work. You may find services in the ceiling void which will lead to additional cleaning and decontamination works. Additional items left in the asbestos enclosure will add time on to the 4 stage clearance as all of these items will need to be visually inspected by the asbestos analyst to ensure they are free from all dust and debris prior to the certificate of reoccupation being issued.

We’re a professional asbestos consultancy helping businesses deal with asbestos compliance using asbestos surveys, asbestos testing, and asbestos removal. Please call one of the team, or use the online form to obtain your free quotation. If you would like further information or advice on asbestos and asbestos training, contact the team on 0844 818 0895 or email info@acorn-as.com.